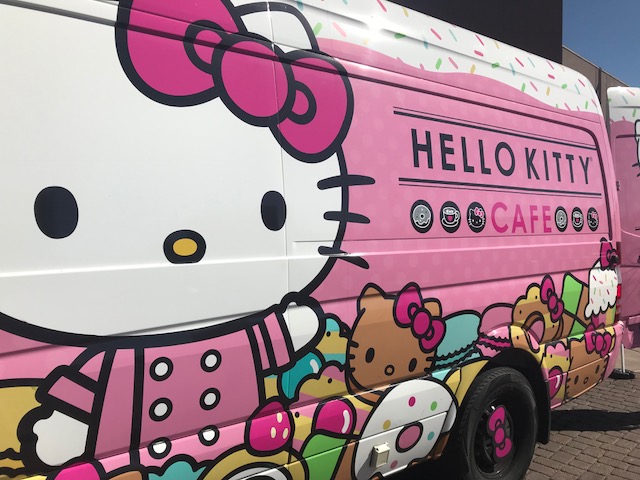 The Hello Kitty Cafe Truck made its way to Albuquerque on March 3rd, at the ABQ Uptown Shops.

The Hello Kitty Cafe Truck was stationed in between Frost Gelato and the California Pizza Kitchen. People were lined up since before the 10am opening, ready to purchase merchandise and food from the truck. Attendees were dressed up in their cutest Hello Kitty themed outfits.

Attendees were filled with excitement to see what the truck had to offer. 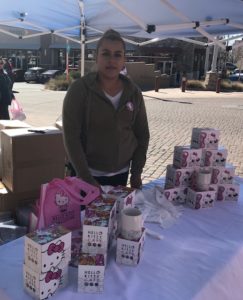 “I want to buy whatever they have left, I’ve heard that they sold out of a lot of stuff… This is how I regularly dress, so I just like went into my closet and got my favorite dress… I was super excited for this event… I’ve been like stalking it on the internet for like ever now and I’ve just been planning on traveling to go see it, but it came here,” said Shirley Hill, Hello Kitty Cafe Truck attendee.

“I think it’s pretty cool, I’ve never seen anything like this before, so the opportunity presented itself to just help them out and I thought it was cool… I love Hello Kitty,” said Jenny Avila, a Hello Kitty Cafe Truck employee. 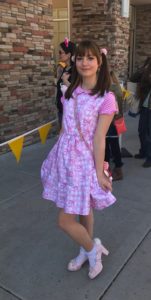 “I’m really, really excited… I’m a huge fan of Hello Kitty… I’m also here for the J-Fashion meet, which is a meet-up of people who are interested in Japanese fashion,” said Alli Thompson, a UNM student and Hello Kitty Cafe Truck attendee.

Rabbit + Hare set up a Facebook event page, concerning a J-fashion meet up at the Hello Kitty Cafe Truck.

A J-fashion meet up is when people convene and dress up as their favorite japanese characters. Rabbit+Hare is an Albuquerque based wig company, that specializes in cosplay and fashion. Cosplay is dressing up as one’s favorite character from a video game or movie.

The Hello Kitty Cafe Truck is trademarked by Sanrio.

The truck stayed in Albuquerque until 8pm, selling out of everything.